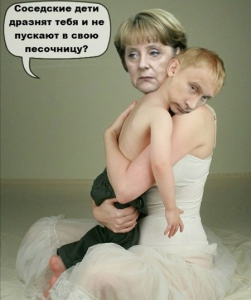 […]Jews and Europe go back a long way. The experience of Jews in Europe has added several words to the human vocabulary – words like expulsion, public disputation, forced conversion, inquisition, auto-da-fé, blood libel, ghetto and pogrom, without even mentioning the word Holocaust.

That is the past. My concern is with the future. Today the Jews of Europe are asking whether there is a future for Jews in Europe, and that should concern you, the leaders of Europe.

[…]Angela Merkel asked, “What would you like me to do, Chief Rabbi?” I did not have an easy answer for her then. I do now.

It is: reverse, immediately, the decision of the Cologne court that renders Jewish parents who give their son a brit mila, even if performed in hospital by a qualified doctor, liable to prosecution.

[…]The case – like the banning of shechita (ritual slaughter of animals) by the Dutch parliament, now thankfully reversed – illustrates the deep difficulty Jews are facing in Europe today. Both cases initially had nothing to do with Jews. They were directed predominantly against Muslims, whose population vastly outnumbers that of Jews in almost every country in Europe.

They are part of the backlash against the misguided policy, adopted by most European countries in the 1970s, known as multiculturalism. This was meant to promote tolerance.

Its effect was precisely the opposite. It encouraged segregation of ethnic minorities, not integration, and instead of getting people to ignore differences it made an issue of them at every stage.

The Muslim communities of Europe have been in the frontline of both the policy and its discontents. The result has been that in Germany the court, and in the Netherlands the parliament, have sought to ban a Muslim practice, while the Jewish community has suffered collateral damage in both places.

That is part of the problem, but not all of it.

I have argued for some years that an assault on Jewish life always needs justification by the highest source of authority in the culture at any given age. Throughout the Middle Ages the highest authority in Europe was the Church. Hence anti-Semitism took the form of Christian anti-Judaism.

…In the post-enlightenment Europe of the 19th century the highest authority was no longer the Church. Instead it was science. Thus was born racial anti-Semitism, based on two disciplines regarded as science in their day: the “scientific study of race” and the Social Darwinism of Herbert Spencer and Ernst Haeckel. Today we know that both of these were pseudosciences, but in their day they were endorsed by some of the leading figures of the age.

Since Hiroshima and the Holocaust, science no longer holds its pristine place as the highest moral authority.

Instead that role is taken by human rights. It follows that any assault on Jewish life – on Jews or Judaism or the Jewish state – must be cast in the language of human rights.

Hence the by-now routine accusation that Israel has committed the five cardinal sins against human rights: racism, apartheid, ethnic cleansing, attempted genocide and crimes against humanity. This is not because the people making these accusations seriously believe them – some do, some don’t.

It is because this is the only form in which an assault on Jews can be stated today.
That is what the court in Cologne has done. It has declared that circumcision is an assault on the rights of the child since it is performed without his consent. It ignored the fact that if this is true, teaching children to speak German, sending them to school and vaccinating them against illness are all assaults against the rights of the child since they are done without consent. The court’s judgment was tendentious, foolish and has set a dangerous precedent.

In historical context, however, it is far worse. By ruling that religious Jews performing their most ancient sacred ritual are abusing the rights of the child, a German court has just invented a new form of blood libel perfectly designed for the 21st century.

Chancellor Merkel, the answer to your question, “What would you like me to do?” is simple. Ensure that this ruling is overturned, for the sake of religious freedom and the moral reputation of Germany.

I am greatly encouraged by Angela Merkel’s swift and decisive response regarding the Cologne court ban on circumcision. She has rightly recognised that this is a fundamental issue of religious freedom that cannot be allowed to go unchallenged. I commend her and the German government for calling for urgent legal certainty on this issue. I was also grateful to receive a response from the German Ambassador to my letter who, echoing the words of Foreign Minister Guido Westerwelle, said that in Germany the freedom to profess a religious creed was inviolable.

for the sake of general perception it should be clear that all crimes, including those committed in the name of ideology praising the most respectable ideals like equality and justice, are condemned, and there is no exception to this principle.

The Assembly also acknowledges that the values of the social equality and social justice have become essential elements for both foundations for political pluralism and for just and democratic society, in shaping and advocating of which a contribution of non-totalitarian social ideas, movements, organisations and parties is undeniable.

I could agree with every word in the amendment. However, it has no bearing on the report. I am therefore against it. I support its content but not its inclusion in the report.

The draft recommendation in Document 10765, as amended, is not adopted because the required two-thirds majority was not achieved.